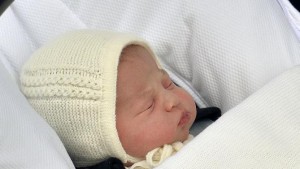 Princess Charlotte Elizabeth Diana is the newborn daughter of Prince William and his wife Kate, the Duchess of Cambridge. Although young, hip and modern, they chose a name rich in family history and respect for her elders. Charlotte is the feminine form of her grandfather’s name Charles. Elizabeth is a nod to her great grandmother, Queen Elizabeth II. And finally, Diana is in honor of her grandmother, the late Princess Diana.

Charlotte had been a front-runner in the name guessing prior to her birth. Though there have been other Charlotte’s in the royal family, most lived over 200 years ago. There was a Queen Charlotte, wife of King George III. The latest Charlotte is 4th in line to be Queen after her grandfather, Prince Charles, father, Prince William and brother, 21-month-old Prince George. Many were also hoping for her name to include the always popular Diana.